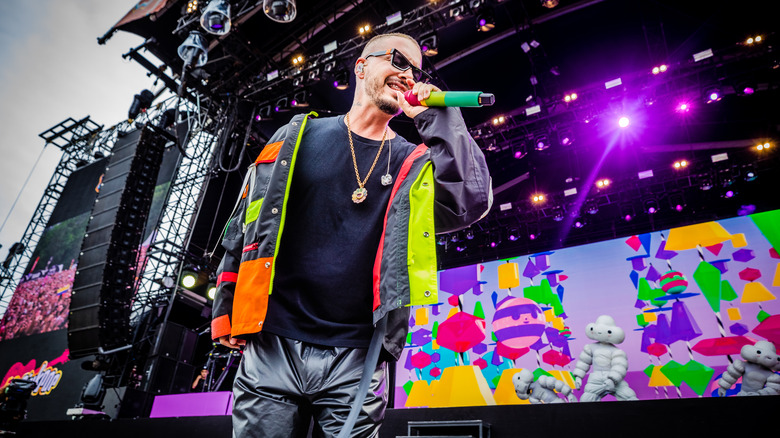 J Balvin is a Colombian reggaeton singer who has a net worth of $20 million. Balvin is one of the best-selling Latin artists with more than 35 million sales worldwide.

J Balvin was born in Medellin, Colombia on May 7, 1985. He grew up listening to American rock groups like Metallica and Nirvana and developed an interest in reggaeton after listening to Daddy Yankee. Although he was born into a middle-class family and grew up in a large home in the hills outside the city of Medellin, his father’s business went bankrupt when Balvin was 15 and the family lost their home and car and had to relocate to a poorer neighbourhood.

When Balvin was 16, he participated in a foreign exchange program that found him in Oklahoma, but he was disappointed in the experience and noted “I was expecting the U.S. that everyone knows from Hollywood.” After the program, he moved to New York City to study English and music, living with an aunt and working as a dog walker. He worked various jobs illegally before ultimately deciding to return to Colombia and begin performing at various urban clubs in Medellin. He increased his social media following as he enrolled at the prestigious EAFIT University in Medellin.

At age 19, he began to pursue a career in music when he met DJ and business partner David Rivera Mazo in a freestyle rap battle on the streets of Medellin. They became fast friends and started promoting and producing their own music. J Balvin signed to EMI Columbia in 2009 and soon released his first single “Ella Me Cautivo,” which charted at No. 35 on the Billboard Tropical Songs chart. His first album, “Real,” was released in 2009. His first international hit was “Yo Te Lo Dije.” Balvin had some success with his album La Familia which was released in 2013 and reached #10 on the US Latin chart. Shortly after, he released his second track in the U.S., “Ay Vamos,” which solidified his post in the Latin urban market, winning a Latin Grammy Award for Best Urban Song. The music video is one of the most watched Latin music videos of all time, sitting at over one billion views.

Balvin released the album “Energia” in 2016 which reached #1 in Mexico and #1 on the US Latin chart. His premiere single from the album “Ginza” reached #1 in Mexico, Italy, Mexico, Spain, and on the US Latin charts. The video for “Ginza” broke the record for the most views for a Latin music video in the first 24 hours at over two million views. J. Balvin became the first artist to receive a diamond certification in the Latin field, denoting digital sales of 600,000 units. Three other tracks from “Energia” reached the top 10 on the Latin charts: “Bobo,” “Safari,” and “Sigo Extranandote.” “Bobo” spent a week at the top of the Billboard Hot Latin Songs chart. In promotion of “Energia,” J. Balvin embarked on a tour that featured several special guests including Zion & Lennox, Bad Bunny, and French Montana.

In 2017 Balvin released his new single and music video for “Mi Gente.” On August 1, 2017, “Mi Gente” became the number one song in the world according to Global Top 50 on Spotify. It quickly garnered 1 billion views on YouTube. Despite the song’s success, it did not win any awards at the 2017 Latin Grammy Awards, as it had competed with Luis Fonsi’s “Despacito” which swept many awards that year. In 2018, J Balvin teamed up with Cardi B and Bad Bunny for the song “I Like It”, which reached #1 on many charts including the Billboard Hot 100, marking his first single to make it to the U.S. Hot 100.

In June 2019, J. Balvin released a new album in collaboration with Bad Bunny, “Oasis.” It was released overnight and deemed a surprise drop. It peaked at No. 9 on the Billboard 200 and topped the Billboard U.S. Latin Albums chart. It was named one of Rolling Stone’s Best Latin Albums of 2019 and nominated for Best Latin Rock, Urban, or Alternative Album at the 2020 Grammy Awards. That summer, Balvin and Bad Bunny headlined the Uforia Latino Mix Live concert series to raise money for victims of the shootings in Dayton, Ohio, and El Paso, Texas. In January 2020, J. Balvin was a guest performer at the Super Bowl halftime show headlined by Shakira and Jennifer Lopez. In March 2020, J. Balvin released his fifth studio album, “Colores.” He set a new record, with all his songs on the album occupying Spotify’s Top 10.

In addition to releasing his own music, J. Balvin has been featured on several other singles including “Blurred Lines” by Robin Thicke featuring Pharrell Williams. His collaboration with Rosalia Con Altura won Best Urban Song at the 2019 Latin Grammy Awards. He also collaborated with Major Lazer and El Alfa on the single “Que Calor.” Balvin has won two Latin Grammy Awards and an MTV Europe Music Award.

J Balvin made his $20 million fortune after he landed a deal with the label Capitol. His second album, “La Familia” helped him not only earn a lot of money but receive a lot of attention as well. The album, which includes some of his classics “Tranquila”, “Sola”, and “6 AM”, topped multiple album charts and became his first to receive multiple gold and platinum certifications in eight different countries.

Jose rose to prominence in 2014 just after his second studio project was released. His songs “6 AM” and “Ay Vamos” became international hits that landed in several international charts where they spent a number of weeks. The remix of the latter, which features Nicky Jam and French Montana, was even used as a soundtrack for the widely-known film “Furious 7”. He continued to gain popularity throughout 2015 and 2016 with the release of various songs and his third album “Energia”.

To get more update like this visit street dynamics.

J Balvin has won numerous awards and achievements. He became the first recipient of the Global Icon Award given by Lo Nuestro Awards, in recognition of his contribution to spread Latin music worldwide, and the first recipient of the inaugural Contemporary Song of the Year at the BMI Latin Awards with “Ay Vamos”. His single “Ginza” was recognized by Guinness World Records for the longest stay at number 1 on Hot Latin Songs chart ever by a single artist, and is the second artist with the most number one on Latin Rhythm Airplay, behind only Daddy Yankee as of 2019.

His music videos have billions of views, and had a consecutive record-setting of 100 million views on VEVO with “Tranquila”, 6 A.M.”, “Ay Vamos” and “Ginza”, which marked the most viewed Spanish video debut in history. “Ay Vamos” became the first reggaeton song to exceed one billion views on YouTube. In addition, VEVO named Balvin “most watched Latin artist of 2015” and he became the “most viewed artist on YouTube Global” as of 2019. Balvin has multiple streaming records. “Mi Gente” is the first Spanish language song to be number one on Spotify’s Global Top 50 Chart, and he became the most streamed artist on Spotify as of 2018, overtaking Drake’s previous record. He remains on Top 5 as of April 2020. With his album Colores set a new record with all his songs occupying the Top 10 on Spotify. Additionally, he became the first Latin artist to reach one billion streams on Apple Music.

His other achievements include selling 35 million singles worldwide, and 25 billion streams as of 2020.

J Balvin experiences panic attacks and states that “meditation saved [his] life”. When his anxiety was at its worst, he recalled that “I forgot about my happiness. I forgot about José (J Balvin’s given name).” He is known for his tattoos and got his first tattoo when he was twelve years old. His mother suffers from the rare genetic condition acute intermittent porphyria, which causes seizures, chronic pain, and mental health difficulties. He has the word “Familia” tattooed on his chest in her honour. Unlike many popular reggaeton singers who move to the United States upon gaining popularity, J Balvin continues to live in his hometown of Medellin, explaining, “It keeps me real. I’m gonna be real everywhere I go, but I’m with my people, I’m connected to my roots – I’m in my country! I don’t need to live somewhere else. I respect the ones who make it and leave their home base, but I’m good in Colombia.”.

In 2020, it was revealed that J Balvin contracted COVID-19, but he has since recovered.